↓
Home→Family→World Relationships were Established by God, Not Man

The World Relationships of Home and Family Established by God

“In the beginning…1” the world relationships of home and family were decreed and brought forth with Adam and Eve created in God’s image and residing in the Garden of Eden, the first earthly, world home of man and woman. The world was also populated as the home of the fowl, beasts, and water creatures. These described events are well accepted and acknowledged by most of the Christian World. The book of Genesis provides our understanding and view into these events. I believe that an acceptance of the below information completely debunks all the current worldly claims for the “I’m OK, you’re OK” attitude toward the perverse LGBTQ2 same-gender lifestyle and demands on the rest of mankind.

The Holy Bible and the Book of Genesis

Why read the book of Genesis?  There have been many beginnings: the first plants and animals, the first man and woman, the first sin, the first news of God’s salvation.  It also shows God’s dealings with Noah, Abraham and others, demonstrating his desire to fellowship with his people.  From: The Quest Study Bible Introduction to the book.

In the beginning God created the heavens and the earth.  NIV Genesis 1:1.

26Then God said, “Let us make man in our image, in our likeness, and let them rule over the fish of the sea and the birds of the air, over the livestock, over all the earth, and over all the creatures that move along the ground.”  27So God created man in his own image, in the image of God he created him, male and female he created them.  NIV Genesis 1:26-27.

1Now for the matters you wrote about: “It is good for a man not to marry.  2But since there is so much immorality, each man should have his own wife and each woman her own husband.  3The husband should fulfill his marital duty to his wife, and likewise the wife to her husband. 4The wife’s body does not belong to her alone but also to her husband.  In the same way, the husband’s body does not belong to him alone but also to his wife. 5Do not deprive each other except by mutual consent and for a time, so that you may devote yourselves to prayer. Then come together again so that Satan will not tempt you because of your lack of self-control. 6I say this as a concession, not as a command. 7I wish that all men were as I am. But each man has his own gift from God; one has this gift, another has that.  NIV 1 Corinthians 7:1-7.

Concerning Who You Marry

Marriage is a sacred vow between a man and woman and the Bible offers many verses that offer guidance for married couples, husbands, wives, newlyweds and engagement. Read verses from the Holy Bible about marriage in relation to God, Jesus Christ, and the Christian faith.

World Relationships: Marriage is Between a Man and a Woman. 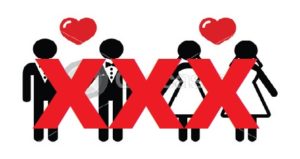 But I tell you that anyone who divorces his wife, except for marital unfaithfulness, causes her to become an adulteress, and anyone who marries the divorced woman commits adultery.  NIV Matthew 5:32.

3Some Pharisees came to him to test him.  They asked, “Is it lawful for a man to divorce his wife for any and every reason?”  4 “Haven’t you read,” he replied, “that at the beginning the Creator ‘made them male and female,’ 5 and said, ‘For this reason a man will leave his father and mother and be united to his wife, and the two will become one flesh’? 6 So they are no longer two, but one. Therefore what God has joined together, let man not separate.”  NIV Matthew 19:4-6.

1In the beginning God created the heavens and the earth.  NIV Genesis 1:1.