Thou Shalt Not Kill5 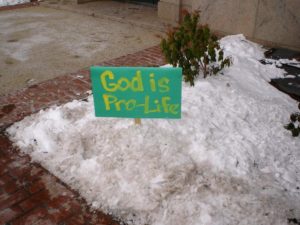 God Knew You Before You Were in the Womb

Apparently, on the basis of discussions I have read, the new 2019 Alabama abortion law removes all abortion permissions except in the case of danger to the mother or both the mother and fetus. Many opponents disagree with not allowing exceptions such as for rape and incest. I don’t believe the evidence of life has exceptions! The exceptions place a value on the life that is subjective. The value is based on circumstance and other external factors. In this Alabama case, the parties with standing make the decision on the basis of which life can be saved or which will do the least harm. I have not read the proposed law, but I have observed much discussion and misrepresentation or misunderstanding on the issue.

We have one very direct command about the taking of life:

Consequences are prescribed for violation of Exodus 20:13:

6Whoso sheddeth man’s blood, by man shall his blood be shed: for in the image of God made He man. Genesis 9:6, King James Version (KJV).

God comes to us where we are:

In researching this article, I visited several web sites looking for other views concerning the abortion issue. One of the sites, https://www.lifenews.com/2018/12/13/for-decades-science-has-confirmed-life-begins-at-conception-and-a-fetus-is-a-baby, offered a view into the research they have done. Some of the research is presented below.

In McGraw-Hill’s textbook, “Patten’s Foundations of Embryology, 6th ed.,” for example, biology professor Bruce M. Carlson of the University of Michigan, writes, “The time of fertilization represents the starting point in the life history, or ontogeny, of the individual.”1

In other words, you and I begin our lives not when we’re born, but when we’re conceived.1

Another textbook, “Human Embryology and Teratology, 3rd ed.,” from publisher Wiley-Liss, asserts that fertilization is the “critical landmark” when a new, genetically distinct human organism is formed. Yet, the text explains, “life is a continuous process” throughout the pregnancy.1

As Harvard University Medical School professor Micheline Matthews-Ross testified before a 1981 U.S. Senate Judiciary Committee, “It is scientifically correct to say that an individual human life begins at conception … and that this developing human always is a member of our species in all stages of life” (New York Times, April 26, 1981).1

Hopefully this new abortion law proposal will find its way to the Supreme Court and overturn the current Roe vs Wade law, or at least move the law closer to total prohibition of abortion. I believe it is justifiable to enact criminal penalties against both the abortion performers and assistants, or enablers, as well as the person obtaining the abortion.

For more discussion on the abortion issue see: